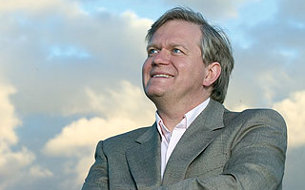 Brian Schmidt is a Laureate Fellow at The Australian National University's Mount Stromlo Observatory. Brian was raised in Montana and Alaska, USA, and received undergraduate degrees in Physics and Astronomy from the University of Arizona in 1989. Under the supervision of Robert Kirshner, he completed his Astronomy Master's degree (1992) and PhD (1993) from Harvard University.

In 1994 he and Nick Suntzeff formed the HighZ SN Search team, a group of 20 astronomers on 5 continents who used distant exploding stars to trace the expansion of the Universe back in time. This group's discovery of an accelerating Universe was named Science Magazine's Breakthrough of the Year for 1998.

His work on the accelerating universe was awarded the 2011 Nobel Prize in Physics, jointly with Adam Riess and Saul Perlmutter. Brian is continuing his work using exploding stars to study the Universe, and is leading Mt Stromlo’s effort to build the SkyMapper telescope, a new facility that will provide a comprehensive digital map of the southern sky from ultraviolet through near infrared wavelengths.